An exception is defined as a pledge that does not match the standard pledge for a particular reward group. Backers that have pledged more or less than is required to receive their Kickstarter reward are segmented accordingly to allow you to address any individual circumstances that may exist.

You can view exceptions for a reward group after creating their surveys on Crowd Control or you can access the group’s exceptions via reward management later on.

Backers with exceptions are grouped for your convenience according to the exception value, e.g. backers that pledged an extra $40 dollars. You can resolve exceptions individually or in bulk.

Backers with exceptions will still receive their survey notifications with their original reward tier.

Exceptions give you the ability to adjust the survey given to a backer based on their pledge. There are three actions for resolution of an exception: create new survey, add exception value, and ignore.

- Create new survey allows you to build a new survey for the selected backer(s).

- Add exception value adds the defined value as a credit to the backers survey. Referencing the image above, the backer would get an additional $35 credit added to their survey (with this credit being detailed in their survey notification).

- Ignore disregards the exception value and assigns the backer(s) the standard survey for their reward group.

The process for building exception surveys is identical to the general process, though it does allow you to provide a backer with a defined dollar amount that can be spent on your store. For example, if a backer has pledged an additional $10 but this is not enough to actually get another reward, you can give the backer $10 store credit to use towards the purchase of an add-on. You should specify this $10 credit as a reward description so the backer is aware of this value.

Note: sometimes backers are being generous and just want to give you some extra funding while others may have sent an inquiry asking if they can double their pledge. How you address these backers is up to you. 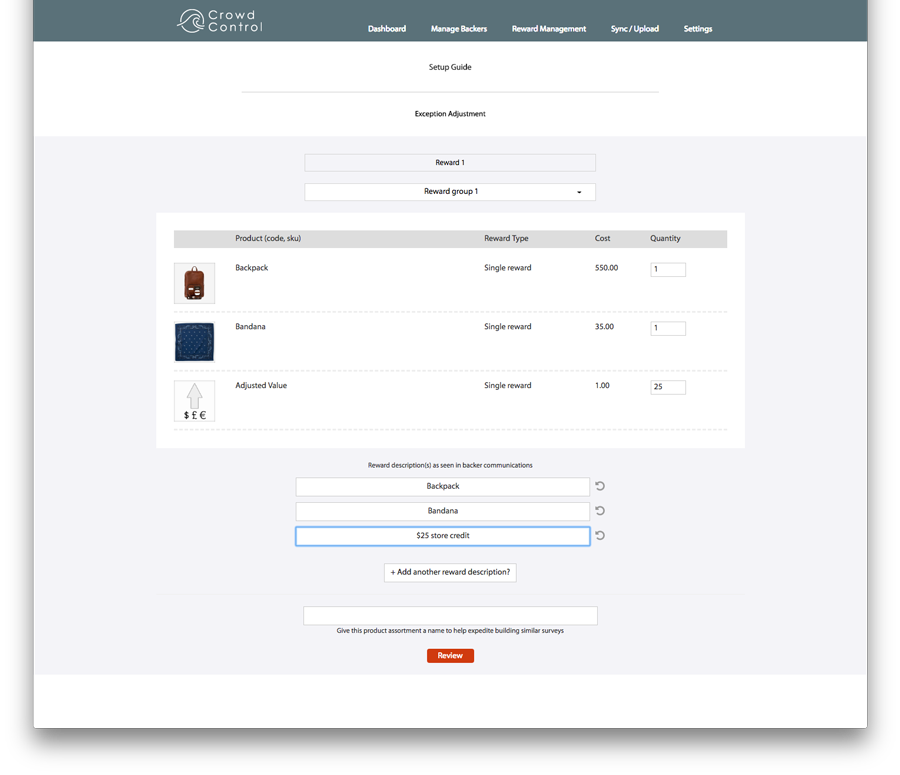 Did you find it helpful? Yes No

Send feedback
Sorry we couldn't be helpful. Help us improve this article with your feedback.