Backers with pledge amounts that are atypical for their pledge level - i.e. pledge overages - are segmented as exceptions when creating surveys. Alternative surveys can be created for such backers using the exceptions process. Exceptions can be ignored, have the overage added to the original survey value, or have an entirely new survey created.

A pledge on Kickstarter can be broken down by A) the minimum pledge for a reward, B) a shipping cost according to a backer's country and the settings on Kickstarter and C) the actual amount pledged. When A + B ≠ C, a backer's pledge is identified as an exception and must be resolved before surveys are created for the originating backer group. Crowd Control provides multiple options for each business to decide how to address these unique circumstances to provide backers with the most appropriate survey experience.

Pledge exceptions can be resolved immediately after creating surveys for a pledge level or at any time via the surveys page of the app. This function is only seen if a pledge level contains at least one backer with a pledge overage.

The following options are available for exception resolution:

Pledge exceptions from the pledge level are displayed in a single table. Backers with the same pledge overage are grouped together for ease of resolution, but individual backers can be addressed if needed. 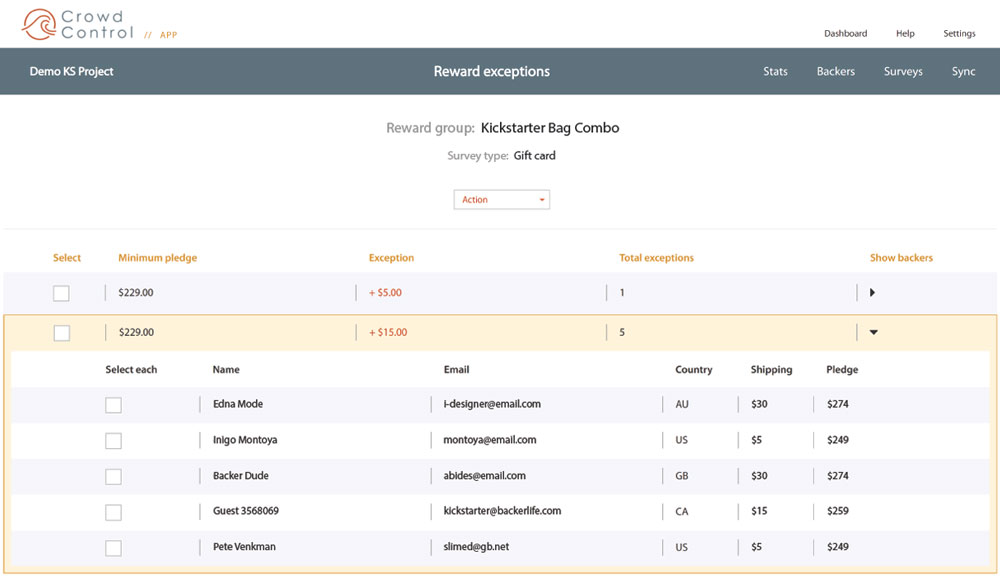 Using this action on the exceptions page allows for the creation of a new survey experience for the selected backer(s). The standard survey creation process is repeated, giving the option for a new Shopify collection to be selected and new product specifications to be made.

Creating a new survey for exceptions gives the option to increase a survey's value in single increments of a store's currency. Using the image below as a reference, the survey is given an extra $15 credit that could be applied to a survey's cart total. 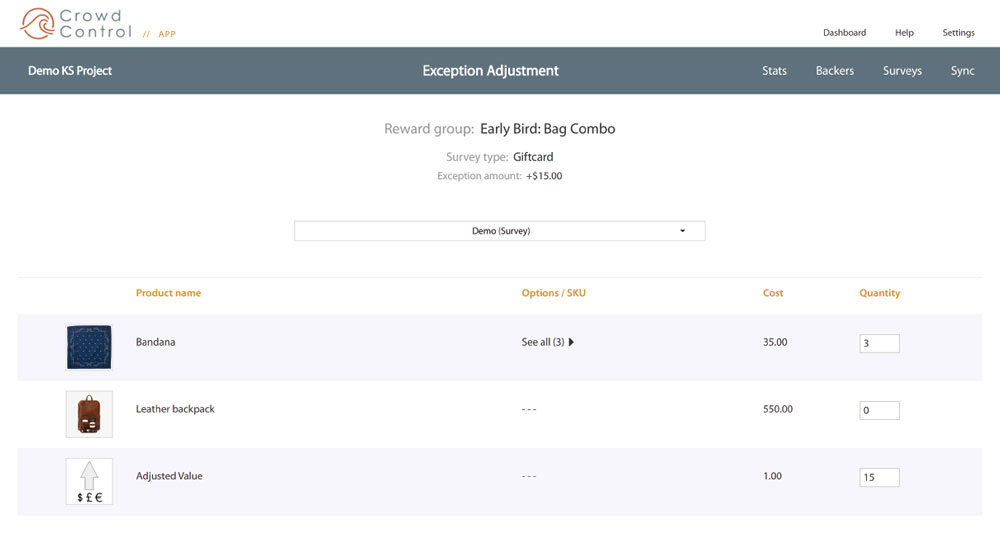 Using this action gives the selected backer(s) the same survey experience and value as their pledge level's original survey. In other words, the pledge overage is assumed to be a donation and the backer is not expecting anything beyond the reward described for their pledge level.

Did you find it helpful? Yes No

Send feedback
Sorry we couldn't be helpful. Help us improve this article with your feedback.